You are here: Home / restaurants and bars / Spinasse 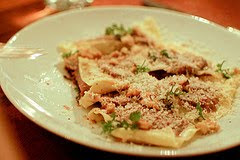 I admit that I had high expectations for Spinasse, a sweet little Italian (or Piedmontese if we’re being really accurate) restaurant on Capitol Hill. I had been hearing good things from several friends who know food, so the restaurant already had a lot to live up to. I may be spoiling the surprise here, but I’m just going to tell you up front that it didn’t disappoint.

At least half of the few seats inside are at communal tables, which I suspect makes Seattleites just the tiniest bit edgy. At least in theory we really want to chit chat with the people sitting next to us at the communal table, but it just doesn’t seem to come naturally. We snagged two seats at the marble-topped counter, which faces the open kitchen and surrounds the petite bar. (Come to think of it, I must like sitting in close proximity to where the action is, because I’m also a big fan of the counter at Matt’s in the Market and the bar at Palace Kitchen.) Here, too, we chit chatted with our neighbors –- nearly unavoidable at Spinasse, I think, given the small space and what seems to be a propensity for gushing aloud about the food.

I began by ordering my default drink of choice, a gin martini, olives. Although this time around I was forced off-course because Spinasse doesn’t serve Bombay Sapphire, but rather Aviation Gin from a distillery in Portland. Pair that very clean gin with buttery, not-your-average-martini olives, and it was a terrific way to start the meal. Even before the drinks arrived a little surprise appeared, house-cured pepperoncini, anchovy, ricotta and capers on toast rounds. From there, we tried two antipasti: thin slices of slow roasted pork served cold with tuna mainesse (its close American cousin: mayonnaise) and squash flan with olive praline, caramelized onion and toasted anchovy. The pork was delicious without a doubt, but the flan blew it out of the water by being shockingly creamy with the lightest squash-y flavor.

Everyone who talks about Spinasse says that the pasta is not to be missed, as it’s made in house and done extraordinarily well. Seasonal ingredients also figure prominently in the food of Spinasse, which were featured to great effect in the “pot-bellied” ravioli filled with autumn greens and topped with toasted almonds. Never would I have imagined what was inside those ravioli was in any way vegetable, the flavor was so rich. Our final dish of the night was another pasta, the maltagliati with a ragu of hazelnut-finished pork belly. Really, really lovely and delicious.

The food and drink at Spinasse are fantastic, but the staff truly made the evening. Kind and gracious, they even accommodated us when, um, somehow the reservation ended up on the wrong evening. Hats off to those who made for a delight of a dining experience.