Something about the exterior of Capitol Hill’s Anchovies & Olives just hadn’t been doing it for me, and I’m convinced that’s why it took me so long to get to the fourth in Ethan Stowell’s growing restaurant empire. Once inside, though, I was hooked. We got there early last Friday night and snagged seats at the bar. That’s often my preferred location, maybe because then I have easy access to a great resource for info about the place (in this case fantastic bartender Gavin), or maybe because fellow diners always seem to be more chatty at the bar — and usually don’t mind when I ask them what they’re eating. 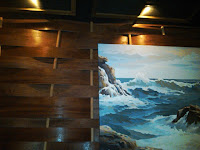 At Anchovies & Olives, sitting at the bar gave me a better view of this oversized basket weave they have going on two very large walls, wide horizontal strips contrasting with lighter vertical poles. And this seascape? Somehow it works. I also love the wood-framed squares of wire mesh that march across the ceiling of the entire space, cleverly hiding industrial bits and warming up the room at the same time. More warmth from candlelight and the single line of glowing globes at ceiling height that run the length of the room, making for a cozy interior from which to look out the sidewalk-height windows to the parade of people going by. 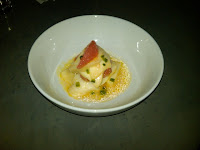 Anchovies & Olives bills itself as a seafood restaurant, and without question seafood was the star of the best dished we sampled. We started with the escolar crudo with pickled red onion, grapefruit and jalapeno. Escolar is also one of my very favorites at Stowell’s How to Cook a Wolf, and A&O’s version didn’t disappoint. The escolar was buttery and delicious, with the onion, grapefruit and pepper adding the right complement of bright flavor. Later in the evening I spied the escolar in a horizontal format (and looking more like what I’ve had at HTCAW) but I liked our carefully assembled stack.

Other standouts on Friday’s menu were the sea scallops with farro, artichoke, blood orange and basil. A repeat of citrus, which Stowell’s crew uses to great effect in several dishes. Perfectly cooked scallops, and farro with enough bite to sidestep the mushy texture I’ve seen accompany some other entrees around town.

I didn’t think that the pasta was as successful; the gnocci with Hen of the Woods mushrooms, swiss chard and a prosciutto broth didn’t have enough of a punch. The risotto, though dramatically black courtesy of the squid ink, was too soupy for me. Gavin tells me that’s the style that results from the addition of squid ink, and also notes that A&O used carnoli rather than aborio rice for this particular preparation. Hmm. And I wasn’t necessarily a fan of the soft cooked eggs, but maybe it’s just that I prefer my mackerel in sushi form rather than in smoked salad form atop eggs.

My favorite dish of the evening was the octopus with fried brussels sprouts, mint-cilantro pesto and walnut. The octopus was sliced relatively thinly, keeping each piece from being too terribly chewy. Its texture and cool temperature contrasted perfectly with the salty, crispy brussels leaves making for the perfect pairing.

I’ll be back to Anchovies & Olives without a doubt, likely taking advantage of happy hour with a bottle of Peroni in hand and a dozen oysters at $1 each on the way. Look for me at the bar…

Filed Under: design, restaurants and bars